​​Pinkham School was honoured to host Mr. David Thomson for a media announcement on Friday, October 4, 2013. 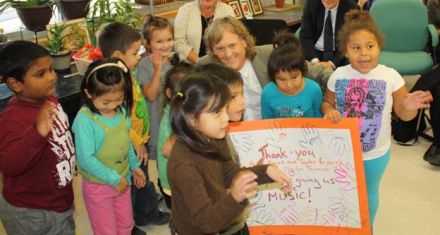 The Royal Conservatory of Music is launching a major initiative to spread online learning in music to young children across Canada, backed by $5-million in seed funding donated by the Thomson family.

The Conservatory will plunge into the competitive world of digital education apps and online learning, creating tools that could help parents and teachers immerse tens of thousands of children in music during their formative years, helping develop their brains and abilities even before they start school.

“It’s transformational as a gift because it allows us the resources to embark on a direction that is really important, not only to us but we think to Canada,” said Peter Simon, president of the Royal Conservatory. “Our intention is to build on this gift.”

David, Peter and Taylor Thomson have named the new Marilyn Thomson Early Childhood Education Centre in honour of their mother, who is an alumni and former board member of the Conservatory. It aims to help parents inspire their children with music before they turn 6. The online tools, soon to be developed from the Conservatory’s existing Smart Start Program, will be subscription-based.

Ms. Elster said children are “fully open to learning” in their first few years, and many of them may be heading for schools where music is no longer considered a priority.

The Conservatory will also digitize its 60-hour, in-person certification program for music teachers so it can be earned from anywhere. And part of the Thomsons’ gift ensures the Smart Start Program will be supported in 16 nursery classes across eight schools in the Winnipeg School Division, including Pinkham School.

A growing body of neuroscience research strongly suggests that involvement in music can improve cognitive abilities such as memory, attention, language and emotional intelligence. For infants, the initiative will create videos instructing parents in activities to help their child start grasping musical concepts, like lifting them high in the air as a melody rises, then dipping them low as it falls. From age 3 onward, children will be able to play interactive games that ask them to tap out rhythms on a tablet, or sing at a particular pitch, earning rewards when they get it right.

We are truly grateful for the generosity of the Thomson Family and their dedication to early childhood learning at Pinkham School.