February 4, 2021
For years the School Board had been renting classroom space in Riverview Church and Clifton Street Church. By 1908 enrolment had so increased that it became necessary to build two 2-storey frame buildings. These buildings became Riverview School and Clifton School. The original Clifton School, a four room building which cost $8,300 to construct was situated on Spruce and Barratt Avenue. In the fall of 1912 the students of the little Clifton school had fun playing “I’m the King of the Castle” on a great mound of earth dumped there by a contractor building a sewer. And when the Board demanded that he remove it a parent, for some reason, said “Why not remove the school?” The Board did - moved it to Dominion Street to make room for the new 32-room Isaac Brock.
Originally constructed in 1913 as a three level facility which included classrooms, library, science rooms, and an industrial arts space in the lower level. The structure has remained largely in its original state with many major improvements and alterations being made to continue its life span. The building has been classified a Grade II Historical Structure by the City of Winnipeg Historic Buildings Committee. Isaac Brock was and is a 3 -1/2 storey solid brick building with limestone facade. An attic suite was provided as living accommodations for the Stationary Engineers. There were 32 classrooms as well as a Home Economics and a Manual Training room, a beautiful balconied Auditorium with stage, and what was claimed to be the best equipped school library in Western Canada. It was formally opened by Sir Hugh John Macdonald, son of Canada’s first Prime Minister, Sir John A. Macdonald.
The school officially opened in 1914 and was occupied by Grades 1 - 8 until 1917 when a High school department was added due to the demise of the old Central Collegiate. The High School department remained until 1923 with the construction of Daniel McIntyre Collegiate Institute.
In December 1934 the first edition of the school newspaper was published. In January, 1935, a school wide contest that attracted over 400 entries was held to pick a name for the school newspaper. The winning entry, “The School Quill”, was submitted by Miss Anna Nicholson, Grade 7, Room 51. She won a prize of 25 cents plus free copies of all future editions of the paper, which was regularly priced at 2 cents per copy. For many years Isaac Brock School was the scene of Remembrance Day Services with the Valour Road Legion in which students marched to the corner of Valour Road and Portage Avenue to lay a wreath at the Memorial plaque there. The plaque was placed there to commemorate the three individuals who were residents of what was then Pine Street and former students of Isaac Brock, and who were awarded the Victoria Cross, the highest award of valour in the British Empire, in the First World War.
William Frederick Hall, Robert Shankland, and Leo Clarke were all residents of Pine Street when they enlisted in the Canadian Expeditionary Forces. In their honour, Pine Street was renamed Valour Road. To date, their picture as well as commemoratives listing all those Isaac Brockers who enlisted in Canada’s fighting forces during both world wars hangs on the wall in the front hall of the school.
During the 1950 flood, several class rooms in the basement were fitted out as living quarters for 140 people. Twenty-three families from homes that were flooded above the first floor were accommodated at the school for three weeks.
In 1969, Isaac Brock had the distinction and the honour of admitting the first physically disabled child (cerebral palsy) to kindergarten in the Division. Dr. Sybil Shack, admitted Halldor Bjarnason, conditionally, 1969. Halldor practised all summer in order to be able to walk to school in the fall, and succeeded. He went on to regular classrooms and pursued a normal school career, using a typewriter from Grade 2 on, and taking whatever athletics possible, even the mile marathon, 8 times around I.B. halls.
At Daniel McIntyre, Halldor was assistant trainer for the Maroons football team and for six seasons was the student athletic therapist for the team. Upon graduation in 1982, he was awarded the Governor-General’s medal; the Terry Fox Humanitarian award, and the Soroptomist International Youth Citizenship award (Western Canada). Graduated with a B.A. Honours, 1986 from the University of Winnipeg and went on to study law at Queen’s University in Kingston, ON.
On March 7, 1963, a 50th Anniversary was held and 75th celebrations were held May 26 and 27, 1988. Amongst the schools’ storied alumni are former NHL referee Andy Van Hellemond, former Boston Bruin Ted Irvine and former Winnipeg Jet Milt Black.
Major-General Sir Isaac Brock (1769 - 1812) 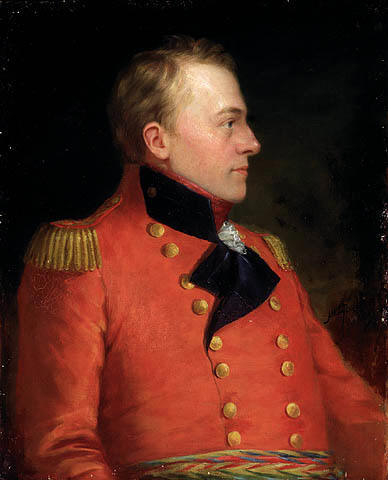 Born in a simple farmhouse on the island of Guernsey in 1769, Isaac Brock was an athletic youth, which stood him in good stead in his career as a British soldier. He achieved the rank of lieutenant at the age of twenty-one, serving in the West Indies, Holland, and at the Battle of Copenhagen. In 1802, he was assigned to Canada where he suppressed a troublesome conspiracy.
In 1810, Major-General Brock was the commander of all troops in Upper Canada and became the Lieutenant-Governor of that Province. In the war of 1812 he led the defending British troops and Canadian militia garrisons against the invading Americans. He distinguished himself and his men in three decisive battles. Facing far superior numbers Brock captured General Hull and his entire army at Detroit. Michilimackinac was another tribute to military skill versus sheer numbers. But the magnitude of this man’s abilities was revealed at the Battle of Queenston Heights on the Niagara Frontier. With a force of a mere 190 soldiers and an American army gathering for an offensive thrust into Canada, Major-General Brock turned the tables on the Americans and led the offensive against them.
​
Back to top