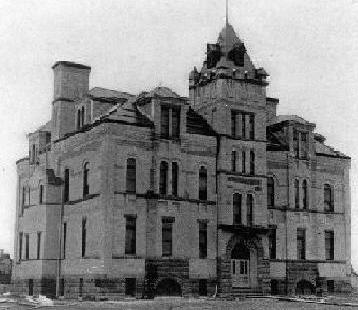 The first Dufferin School was built in 1883. It was a two room school west of Main on Patrick Street. In 1887, a free Kindergarten Association began operating Kindergartens in classrooms rented from the school board for $1.00 per month. An interesting feature of the old school was its water supply came from a flowing well on the corner of the street where a pump was installed. The school was heated by wood stoves which were placed in each classroom.
By 1896 the school population had increased so much a new school was built on Logan, Alexander, Nares and Park Street which was part of the Dufferin park site. It was three storeys high, constructed of solid brick and cost $30,000. It had 10 rooms, an assembly hall and accommodated 540 students. There was a staff of 10 teachers including the principal, Miss M. E. Lamont.
In 1936 the school was badly damaged by fire and a new Dufferin was built.  It was situated on the corner of Logan Avenue and Park Street. It had 13 rooms, 8 of these being classrooms. In 1967, as the school population expanded, a new addition was built onto the school.
The school was named after the Earl of Dufferin who was Governor General of Canada from 1872 - 1878.​
​​
Back to top