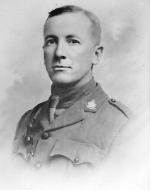 Ralph Russell James Brown was born in Barrie, Ontario. At age five he moved to Winnipeg with his parents. An excellent student, he graduated from Wesley College, now the University of Winnipeg, winning the Governor General's Medal and leading his class at Normal School that same year.

For twelve years (1902-1914) he was principal of Somerset School at Sherbrook Street at Notre Dame Avenue. Ralph Brown came from a very musical family and he was involved in singing at an early age. His skill and love of music helped to develop a rich music program in the school.

During World War I he was a Major in the 44th Battalion and an instructor in Musketry. In France he saw active service at Mons and Vimy Ridge and was wounded at Passchendaele on October 28, 1917. He died from his injuries October 30, 1917. His men spoke highly of him, and his Chaplain said that "Major R.R.J.Brown was fearless, always thinking of others, a Christian gentleman as well as a brave and conscientious soldier."

Before Ralph Brown went to England in 1915, he passed his law exams and would have been admitted to the Bar had he lived. His name is on the Honor Roll of the Manitoba Law Society.

The Ralph Brown School is named in his honour.