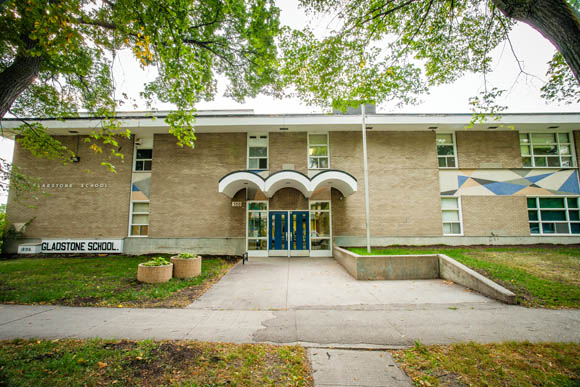 The original school opened in 1898 as a two room school called Pembina School. This school was situated at the corner of Osbourne Street and Corydon Avenue and stood near the famous highway #75, then known as Pembina Trail to the United States.  It was rebuilt as a twelve room school in the same year after the original school burned down and was renamed Gladstone School. The School was named after William Gladstone, a great statesman and former British Prime Minister.

In 1962 Gladstone School made another transformation. The new building was erected on the current site at Gertrude Avenue near Nassau Street. The original school was torn down to make way for the playground and sports field.

In its 122 year history, Gladstone School has had only 18 Principals.

Prepared August, 1992 - Updated 2010 - Gladstone School, once the formidable old building on the protruding corner of Corydon Avenue and Osborne Street, and once a familiar sight to anyone travelling to or from Winnipeg on the famous highway #75, then known as the Pembina Trail to the U.S. In the school’s main hall hung a large framed photograph of the great British Prime Minister, after whom the school was name. Thus, the very name suggests that this school has bridged a very considerable part of Winnipeg’s history. It was also the second school in the Fort Rouge area.

The school opened in 1898 and had its start as a two roomed school called Pembina School. It served the few scattered families living on the fringes of the settled area in south Fort Rouge. It was surrounded by thick bush and sometimes a small boy would be late because he got lost. But one morning in the spring of 1898 when the roll was being called the building caught fire. Fortunately the pupils got out safely and some of the “bad” boys cheered as they watched it burn to the ground. But these hookey-prone lads weren’t free long to go fishing, for the Board at once rented three houses to serve temporarily as a school for the remaining three months of the school term. The cost of renting the three houses was $8 a month. Later, the trustees accepted the insurance company’s offer of $1,900 plus $100 for the furniture, and proceeded to put up a new four roomed school, to be renamed Gladstone, on the same site. On August 31, 1898 at 5:00 p.m., D.W. Bole, acting chairman of the Winnipeg School Board, took trowel in hand and carefully laid the cornerstone for Gladstone School. The three storey stone building presented a very marked contrast to the previous two room structure destroyed by fire that same spring. During the first year only three rooms on the first floor were occupied, but gradually the enrolment increased until it filled all twelve rooms. Drinking water was a problem at Gladstone, but to the delight of the Board, well-water was found at only 80 feet, and a system was installed by which the water was pumped into an air tank in the basement and forced into the rooms by air pressure. In 1950, it was modernized by replacing the plumbing and heating systems. Former pupils recall the fine lacrosse team and the cadet corps in the days of Principal McArthur. The playing field was across the street. In later years the school participated in the annual winter sports days held on the Red River in River Park. Old open-air street cars jogged past the school during the summer, with crowds of picnicers on their way to the way to the park which was a favourite spot. On the south-east corner a movie theatre of the silent film era stood for years.

By the time the 1960s rolled around, the school and surrounding grounds became an ‘island’ surrounded by streams of constantly flowing traffic. Only with the help of alert patrols, vigilant teachers and cooperative policemen, were serious accidents prevented.

In 1963 Gladstone School, then 65 years old was demolished to make way for an expressway at Corydon Avenue and Osborne Street. A new structure was constructed across the backlane on Gertrude Avenue and opened in September 1962.

On June 5, 1963 at 2:00 p.m., Elswood Bole, executive director of Metro and grandson of D.W. Bole who laid the cornerstone of the original Gladstone, officially opened the small tin box at a ceremony in the new school. Mr. Bole, the younger, before the student body from Grades 1 to 7 and seven guests who started at the old Gladstone school the day it opened, presented the tin box to Trustee Andrew Moore of the school board. Trustee Moore, in turn handed the box to school board secretary-treasurer, H.J. Benningen. Some of the box’s contents are displayed in the new school. The box contained a copy of the Manitoba School Act, the school bylaws, the board’s report for 1897, four coins and copies of Winnipeg newspapers.