The school’s striking exterior mosaic, featured on the west side of the school, sustained damage over the pandemic due to vandalism and the elements.

The mosaic was originally unveiled in 2018 as part of a multi-year learning journey at David Livingstone. As a part of an ongoing response to the Truth and Reconciliation’s 94 Calls to Action, students and teachers built and upheld classroom treaties in the fall of 2016. In 2017, after consultation with students, families, community members and staff, the school unveiled its own David Livingstone Community School Treaty and hosted its first Treaty Days for the community. This treaty is now proudly displayed at the front entrance of the school for all to see.

When the damage to the mosaic was discovered at the start of the 2020-21 school year, it was immediately a school priority to repair it—although the ongoing pandemic caused some delays. 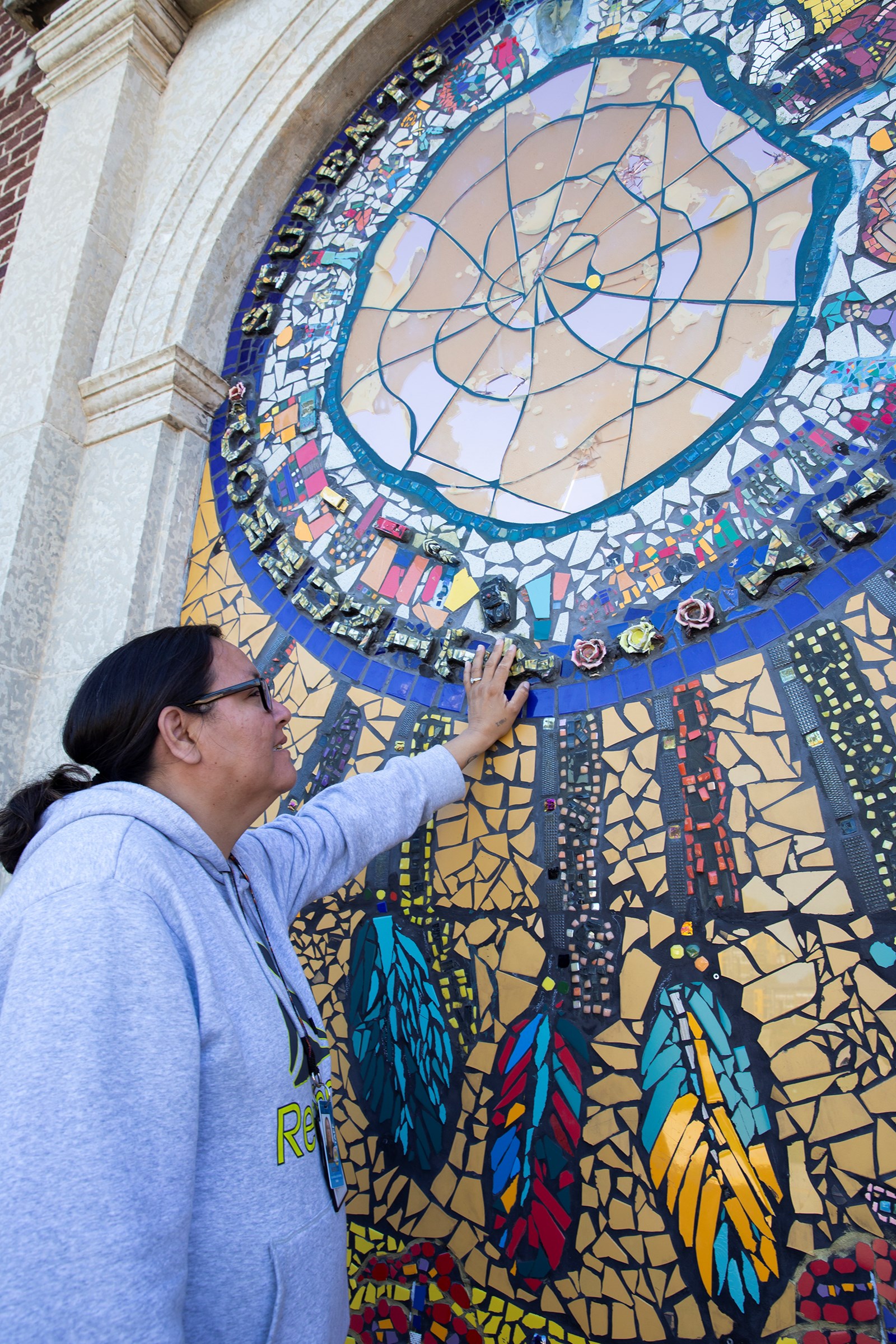 “Because this is treaty work, that mosaic represents an agreement that we have made with students, families, community members and staff to dedicate and focus our energies on helping our children,” said Talitha Kaethler, Integrated Arts Teacher at David Livingstone. “With the breaking of this part of the treaty, we felt it was absolutely important that we use this as an opportunity to look at what reparation means.”

David Livingstone teachers had discussions and conversations in the classroom with their students about treaties, and broken treaties in relation to the damaged mosaic. Staff and students worked together to raise awareness on the ways that treaties and broken promises can be fixed in the spirit of reconciliation.

From May 30 to June 10, the school worked with local mosaic artist Ursula Neufeld on the restoration project.

“Ursula was the artist who worked with our school community to create the original mosaic,” Ms. Kaethler said. “She was finally able to come back to the school and inspect the mosaic. She decided to start fresh and work with parents, students and staff members to collaborate and design a fresh perspective on the eagle. The message that has evolved this time is the emphasis on love.”

Ms. Neufeld said the restoration project was a wonderful learning opportunity for students and the community.

“Community art like this is a great way to send out messages from the school to the community and its children,” Ms. Neufeld said. “This process brings together kids from different classes. Every single class discusses the theme and one child from every class brings forward their class committee’s ideas. We amalgamate those ideas and then we have a children’s artist group to work on the art.” 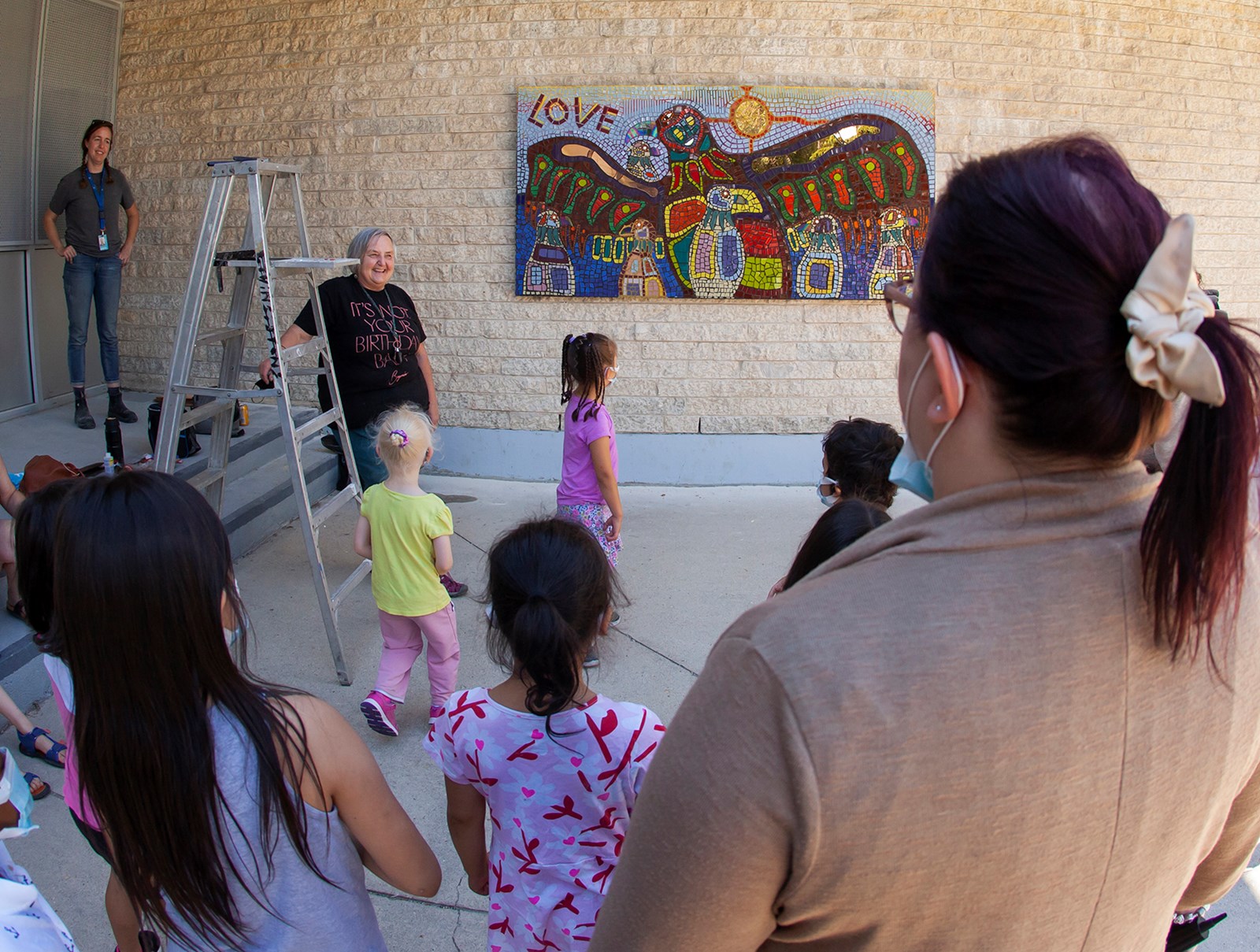 Working in the medium of tile can be tricky, as much thought must be put into the types of tiles and the bonding agents. Ms. Neufeld credited the WSD Building Department, who have been ongoing collaborators in mounting many mosaics throughout the division.

“The carpenters in Winnipeg School Division have been fabulous.”

The first week of the project saw Ms. Neufeld working with a parent cohort, while the second week brought students and staff on board. The upper portion of the mosaic was removed from the exterior wall and brought into the school so students, parents and staff could complete the restoration work. 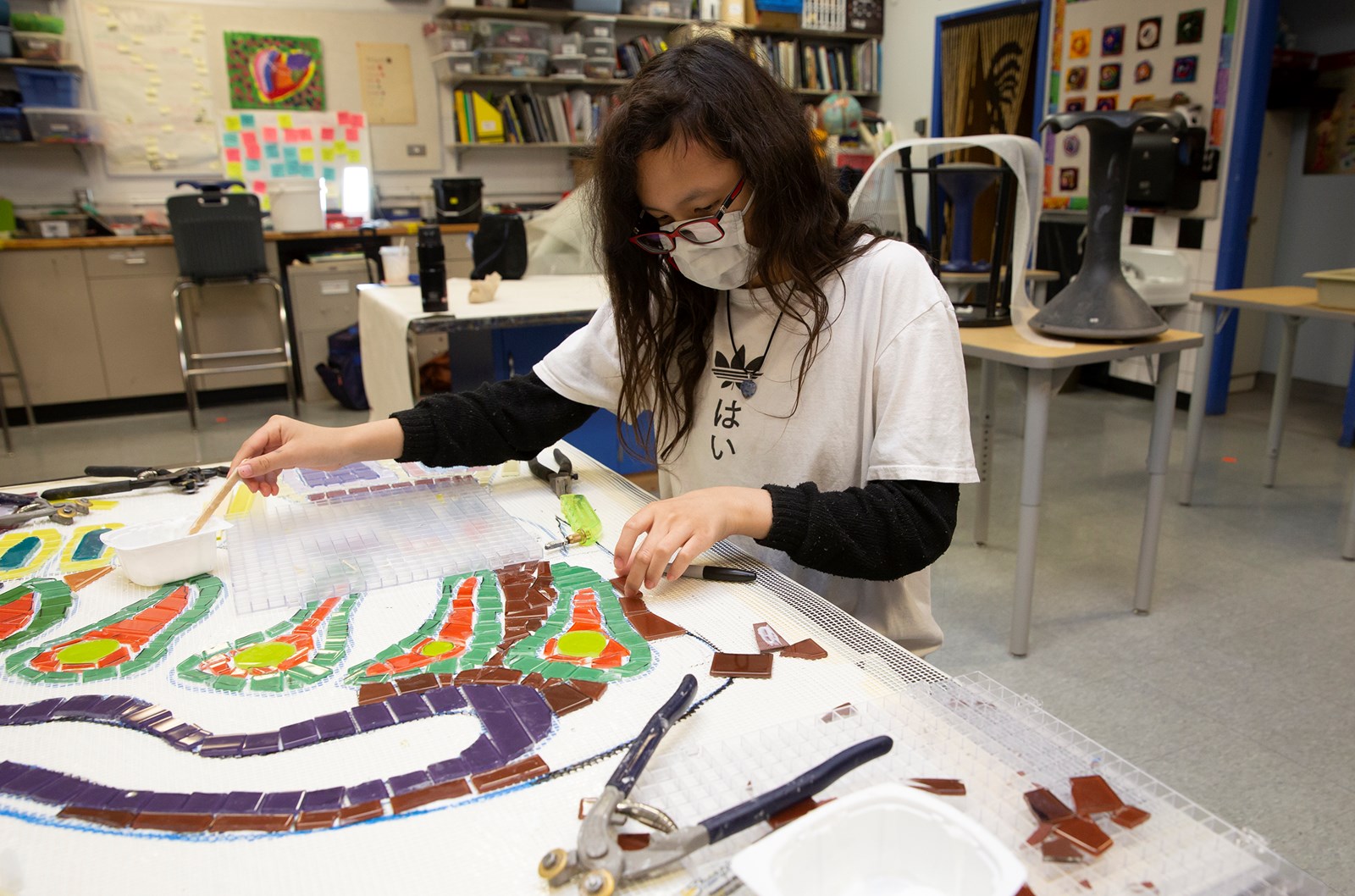 Parent Candace Murdock, who also works at the school as an educational assistant and crossing guard, played a major role in sketching the updated eagle motif in the new design.

Ms. Murdock added that she was excited to be part of the school’s legacy.

“It feels good knowing that I was part of something that is going to be there for hopefully a very long time,” she said. “My kids are excited that I worked on it. My son also got a chance to put some pieces on the mosaic, so he was excited about that too.”

The renovated portion of the mosaic was moved to a more prominent location on the school’s exterior.

The other section of the mosaic will remain on the west side of the school.

The project has ultimately been a testament to the David Livingstone school community as a whole.

“In essence, the reparation of the Mosaic was a tangible, literal, and representative response to reconciliation in our communities,” said Principal Christopher Clarke. “It was an outstanding reminder of the collaborative and restorative work that continues to be the focus of our school treaty.  It is an example of the commitment and dedication to honour the history, present, and future of the community in which we live and work.”

Ms. Kaethler added: “This community has been unbelievably resilient, especially over these past couple of years. This has been a beautiful celebration…it’s the first time we’ve been able to bring parents back into the school in two years.”

The mosaic restoration project was made possible with a Manitoba Building Student Success with Indigenous Parents grant and the Community Schools Partnership Initiative.