Following a 2 year process involving the greater community, our school division, the WSD School Board, our local community, students and staff of Cecil Rhodes, it was determined that Cecil Rhodes School be renamed to the name it is today: Keewatin Prairie Community School.

When Cecil Rhodes School was built in 1908, it was named after Cecil John Rhodes (1853 - 1902), a British-born South African statesman, financier, founder of the Rhodes Scholarships at Oxford and one of the great empire builders of the late 19th century (Encyclopedia Brittanica). The Rhodes tradition of accomplishment continues at the school named in his honour. There is hardly a professional or field of endeavour that does not have its share of Cecil Rhodes School alumni whether in the ministry, medicine, the arts, industry, politics, government at all levels, teaching, law enforcement agencies and to sports.

Since the laying of the cornerstone on August 29, 1908 by Trustee George A. Lister, Cecil Rhodes School has always been very much a centre of social life of the community and almost every organization in the Weston community has held meetings there at one time in its history. The original school, containing 11 classrooms and one shop, was built at a cost of $64,781 (exclusive of heating and ventilating systems which added another $10,097.) When it opened, the school enrolled 164 students in Grades 1 to 7. The school population showed a steady increase, reaching 688 students in 1916. By 1917 the enrolment had grown to such a size that extra radiators were installed in the second floor hall and a class conducted there. To help overcome the crowded conditions, authority was given to build a six-room, single storey building on the site at a cost of $21,963 which was ready for occupancy in December 1918. This was known as Cecil Rhodes School No. 2. In 1919 a contract was awarded for an additional seven rooms to the building at a cost of $55,310 with a further addition in 1922 of four rooms costing $13,190. Up to 1919, education in Winnipeg consisted of two parts - an elementary school education which normally required eight years, and secondary school education which normally required four years. Those parts changed in 1919 when the division established the policy and practice of three levels of education: the first six years which were to be known as elementary, the next three years, from Grades 7 to 9 were to be known as junior high and the last three years from Grades 10 to 12 were to be known as senior high. In 1922, students from Cecil Rhodes had a high school close to their community as the Daniel McIntyre Collegiate Institute was built and opened that year. The year 1932 was the year the division stopped offering instruction in Grade 12. Classes in the various subjects in that grade were offered in evening school only, with students paying a fee.

In 1939 the school board voted to provide Grade 12 classes in day school with no fee charged to those who could not afford to pay. Areorganization was necessary to accommodate the sudden increase in the number of students. Three Grade 10 classes were set up in Cecil Rhodes. A typing room was created and the full commercial option for Grade 10 was offered. The fee for Grade 12 students was eliminated in the 1940-41 school year and the subsequent increase in Grade 12 students required the establishment of Grade 11 classes. In November 1940 there were 51 Grade 11 students and both commercial and general courses were offered. The addition of these courses, as well as Grade 11 physics, required an addition to the library and also in the science laboratory. The number of students electing Grade 11 chemistry was too small to warrant the introduction of this option and these students were transferred to DMCI. Continuing plans were prepared to enlarge the science department if student enrolment justified such an expansion. The student growth failed to materialize. In 1945, the small high school department was closed to provide greater elementary accommodation. That same year, the school had a branch library and the school board added $2,000 to its budget for supplementary reading and reference material. In 1951 a contract for $139,000 was awarded for an addition of six classrooms and an auditorium in the No. 1 building and it was ready for use in 1952. The opening of Technical Vocational high school in 1951 provided an additional program for Cecil Rhodes students. In 1961, due to the overcrowded conditions, the school board decided to replace the “small school” and a contract was awarded for nearly $300,000 for 15 classrooms, three kindergarten rooms, a general purpose room and an administrative unit. A new two-storey addition in 1987 to the No. 2 school made facilities available to all students. In addition to eight regular classrooms it included a science room, music room, computer lab, a multipurpose room, staff room and general office area. The new gymnasium was equipped with shower and change room facilities, instructors’ offices and auxiliary storage areas. The existing multipurpose room was converted to a new library with renovations to the arts and crafts room. Entrances were modified to accommodate the handicapped together with the installation of an elevator to service both levels. The new addition was constructed at a cost of $2,239,140 of which $2,116,598 was provided by The Public Schools Finance Board of Manitoba Education and Training. The remaining $122,542 was provided by The Winnipeg School Division No. 1. Architect for the project was The L.M. Architectural Group, with general contracting by Gateway Construction Ltd. In 1989, the Program for Adolsecent Parents and Infant Development (PAPID) and the Program for Pregnant Teens amalgamated and moved into the Cecil Rhodes No. 1 building. The facility was officially renamed the Adolescent Parent Centre (APC) in 1991, operating as a satellite of the Winnipeg Adult Education Centre to provide junior and senior high courses to pregnant and parenting students. Modifications have been made to include child labs and a food and family studies area; the 1951 gymnasium addition has been converted into a food services area. 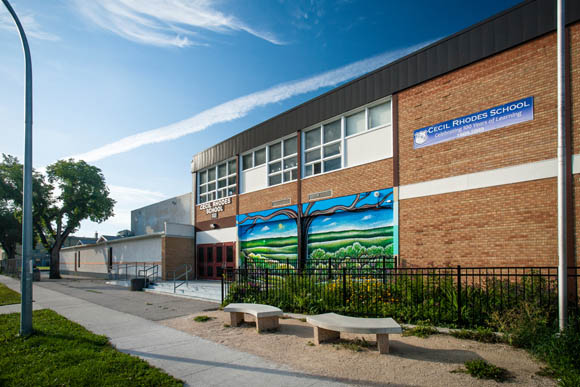