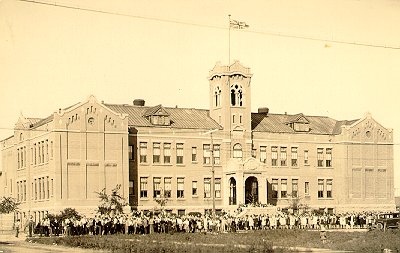 Principal Sparling School was constructed as a part of an ambitious expansion program by the Winnipeg School District prior to the First World War. Like other public institutions, the District was hard-pressed to meet service demands caused by the city’s rapid growth from the mid-1890′s onward. Its chief architect, James Bertram Mitchell, completed a dozen new facilities from 1907 to 1913, all intended to respond in a cost-efficient manner to enrolment pressures and public concern about safety.
The District had relied on a three-storey, solid brick, square model for its buildings. Disastrous fires elsewhere on the continent, however, prompted Mitchell to develop a new plan for a two-storey rectangular school that could be evacuated quickly, yet would maximize available space by providing a well-lit, raised basement for classroom use. Interior corridors also were widened, staircases and exits were strategically located, and fire-resistance of boiler rooms and stairwells was improved.
The dominant features at Principal Sparling School are a 1.5 storey, classically detailed Tyndall stone portico, above which extends an open tower in the centre of the school’s symmetrical front (east) facade. The round-arched portico rises from a rusticated base to an ashlar superstructure. It is topped at the front by a round pediment with a carved medallion set in a floral motif. The arch theme carries through to the large main entrance and to the tower where openings are highlighted in tracery-like fashion by square and round stone columns. The tower also features a curved belt course bracketed by corbelled brick and a stone-capped parapet.
Other details on the main facade include two small gable dormers containing trios of multi-paned windows; a series of diamonds and a belt course below the eaves; windows trimmed with stone lug sills and continuous heads; brick arches; and shallow pilasters to delineate the tower. A plaque inscribed with the school’s name and protected by a hood molding appears above the portico. The outer limits of the facade are defined by the projecting gable ends of the school’s side wings. These sections are windowless save for solitary round openings (now boarded up) near the top. Ornamental relief is provided by patterned brickwork and stone coping along the parapet gables.
The building’s side and rear elevations are similarly designed. At the rear are two classically detailed porches, one of which has been connected to a gymnasium addition. On the side elevations, projecting central sections feature arched windows, corbelled brickwork in an arcade pattern, and curved parapet gable ends outlined by stone coping and finials.
The school sits on a raised, rusticated stone base. It has load-bearing brick walls of local sand-lime brick and a low pitched hip roof. Large rectangular windows dominate, several of which retain stained-glass upper panes, a device commonly used by the District.
Interior finishes include dark wood trim around the doors and windows. Classrooms, offices and other rooms run off wide central corridors. A second-floor multi-purpose area has been converted into a music room and computer laboratory. Several classrooms and a craft room (originally the”manual training” room) are in the basement.
Construction and Opening of the Original School
Construction of Principal Sparling School began in 1912. The corner stone was laid in 1912 by Mr. Johnson Douglass, with Mr. Duncan acting as chairman. The present site was purchased in 1911 for $30,500.00 and the building was constructed at a cost of $142,000.00 by local contractors Brynjolfsson and Son.
The school was formally opened on August 18, 1913. They had 200 students in attendance from grades 1-8, eight teachers (Mary Richardson, Nora Thorvelson, Jennie Johnson, E. Sinclair, C. Schofield, J. Ellis, Miss Dunbar and Aileen Scarth) and the principal, Harry McIntosh.
Industrial Arts and Home Economics were also taught. By 1922, there were 19 teachers and 814 students.
New Addition
On May 8, 1987 a double ceremony, officiated by His Worship William Norrie, was held at Principal Sparling to celebrate the 75th Anniversary of the school and to celebrate the opening of the new addition. The new addition which cost $ 552,000.00 to build, included a new 5,330 square foot gymnasium, equipped with a boys’ and girls’ changing rooms with showers, kitchen, instructor’s office with link way, (foyer) including handicap access connecting the new addition to the existing building.
The existing small gymnasium was renovated and converted into a resource teaching area, multi-purpose room with adjacent storage area, male and female washrooms and the existing multi-purpose room was converted to a new classroom. Mechanical and electrical work on the fire alarm system and ventilation was carried out to current building code requirements.
Joseph Walter Sparling
Joseph Sparling was born in Blanchard, Perth County, Ontario in 1843. After graduating from High School, he attended Victoria University in Cobourg, Ontario, where he received his B.A. and his M.A. degrees. He received the degree of Doctor of Divinity from Garrett Biblical Institute in connection with North Western University, Evanston, Illinois. In 1871 he was ordained to the ministry in Belleville, Ontario. Before he came to Winnipeg, he served as pastor in churches in Montreal, Ottawa and Kingston.
As principal and “Father” of Wesley College (later known as the University of Winnipeg) he witnessed the college grow from a small class in a rented room, to a flourishing institution. He opened the College with three students and left it with four hundred.
J.B. Mitchell
Born in Ontario, Mitchell (1852-1945) was a former soldier and member of the North-West Mounted Police who had studied at the Montreal Art Institute. He was elected to the Winnipeg School Board in 1888, and then later became its Building and Supply Agent. Except for wartime service with the Winnipeg Grenadiers, he continued to direct the District’s building program until retirement in 1928.
Seven of his pre-1914 two-storey facilities are still in use. Although they are comparable in overall plan and design, they vary in size, interior organization and ornamentation. In particular, Mitchell drew from a neoclassical repertoire to provide each building with a distinctive exterior.