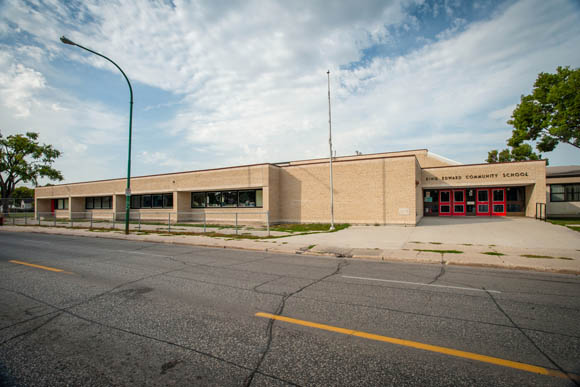 In 1908, the School Board erected three schools: Cecil Rhodes, Lord Selkirk and King Edward. The trustees were proud that they had showers installed in the schools, “an idea which coming from Europe is fast gaining ground in America”. They were prouder still that, because of new developments in construction and installation, the fire hazard would be greatly reduced. King Edward first ope​ned its doors to the public in 1909. Despite its 12 classrooms, (named after England’s King Edward VII) soon became too small for the student population and in 1914 King Edward School No. 2 was built with 18 classrooms and an auditorium.
In 1937, a King Edward principal made school history. When Archer Goodridge followed W.T. Gough at King Edward he instituted an ultra-modern concept of self-government. The class officers of each room, from Grade 2 on, took over almost everything but the teaching. Each class was dismissed by the president without a word being said, and entered the building and the room without supervision; in fact, teachers were told that they were not to be in the room or at the door. Archer also made less onerous the task of teachers on “outside duty”. To make it unnecessary for a teacher to be on the playground at all, he installed, at a high window, a pair of mirrors which covered the “blind” spots on the grounds, and a microphone connected with a loudspeaker outside; from then on the “outside” teacher on duty patrolled from inside. And this electronics-age, “bird’s eye view” system worked. On the first day of its operation the “bad” boys on the grounds, jolted by a stentorian voice coming from nowhere — “Johnny Jones will please go to the office!” — realized that “Big Brother” was really watching them and from then on played together like lambs. King Edward No. 1 and No. 2 served their community well for nearly seventy years before succumbing to the wrecker’s ball in 1976. Both buildings were demolished to make way for a modern, million dollar, 44,000 square foot school.
The replacement for the old King Edward School was planned from the outset to be a “Community” school in the full sense of the word. Included were the purely educational components such as classrooms, resource area, etc., shared facilities such as gymnasium, multi-purpose room, etc., and community facilities such as dental clinic, senior citizens’ lounge, branch library, day care centre, social service offices, etc. The concept of the new school is such that the community and shared facilities are built around an indoor “street”, enable the school to function either independently or community integrated. Because the new building had to be completed before the existing building could be removed, it was decided to build it in two stages, with the school facilities, shared facilities, and two of the community facilities in stage one. The “street” was placed along the east side of the building so that after the existing school was demolished, the second stage community facilities could flank the indoor street and the project would be complete as planned. The new King Edward School which replaced the two old schools is of a one storey design with a partial second floor.
The laying of the cornerstone took place on October 18, 1976 and was conducted by Mrs. Isabel Sudol, trustee of the Winnipeg School Board; she was assisted by Mr. Fred Hooper, member of the King Edward School Community Group, and Mrs. Joan Prokopanko, member of the original building committee. Among the contents placed in the cornerstone box of the new King Edward School were: Annual reports of the Winnipeg School Division No. 1; Coins of Canada, 1, 5, 10, 25 and 50 cent coins; stamps to commemorate the 1976 Olympics in Montreal; Silver pin to commemorate the 100th anniversary of the Winnipeg School Division, 1871 - 1971; a copy of “An Apple for the Teacher”; daily newspapers; copies of “Our Schools”; ten compositions written by students of the school, room 5; scroll containing signatures of the school staff; and a pictorial record of the progress of construction of the new school.
Construction
King Edward No. 1
• Built: 1908
• Opened: Early 1909
• Cornerstone: October 6, 1908
• Contractor: Ross Bros.
• Contract: $75,000 (actual cost $74,853 [building only])
• No. of rooms: 12 classrooms
King Edward No. 2
• Built: 1914
• Opened: December 1914
• Contractor: Sutherland Construction
• Contract: $188,000 (actual cost $165,508)
• No. of rooms: 18 plus auditorium
Demolished: 1976 (both buildings)
Replaced: 1976
• Contractor: Kraft Construction Co. Ltd.
• Architect: No. 10 Architectural Group
• Contract: $1,376,799 (excluding furniture and equipment, site costs and architectural fees)
• Net cost: $1,353,476
• Sq. foot cost: $31.39
• Area of building: 43,618 square feet
• Area of site: 3.21 acres
• No. of Rooms: eighteen classroom teaching spaces including a computer lab, resource room, kindergarten and nursery rooms, library and gymnasium.
Enrolment cap.: 548 including 100 early childhood
Addition: 1994
• two portable classrooms and link way were added to the east of the school 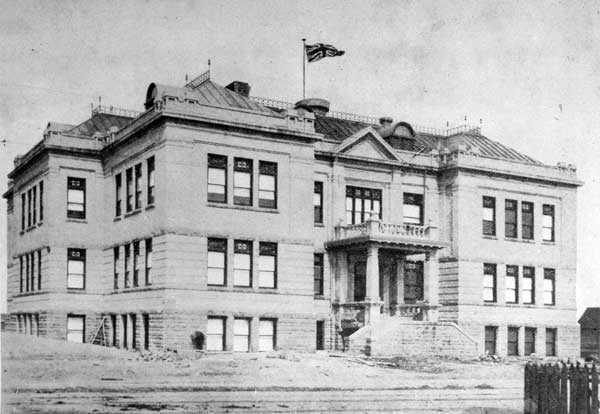