The schoolboys munching their lunch crowded the doorway of the old house on Main Street as the sun glinted on the rifles, and a bright splash of scarlet moved down the street to close the last chapter in the story of the Riel Rebellion. The redcoats were taking two of Riel’s most trusted lieutenants, Big Bear and Pound-maker to Stony Mountain Penitentiary in the summer of 1885, and the rebellion was over. The boys who watched this small, but historic procession were pupils of Machray school, which was then located in a small house between Mountain and St. John’s Avenues. Since that day Machray School has watched a city grow up and its richest history being made. The school has grown from a one room to two buildings and now to a modern, open, well-lighted facility.

In 1884, Alexander Polson and Robert McKay applied to the school board concerning education facilities for children living in the area of Mountain Avenue. They were told: “You may have your school if you can gather together enough children to make it necessary.” The new school was named after Archbishop Robert Machray. It began with 30 students in a house on Main Street when the board agreed to supply staff and a building. Miss Morrison was appointed principal. One story about Miss Morrison and her unusual methods has it that one boy was always detained after school, whether or not he had been guilty of a misdemeanor. It was a question rather, of who was best fitted to do her housekeeping chores. One boy had to saw and split wood for her stove, another had to carry two pails of water from the old pump and a third went to the store for her groceries. 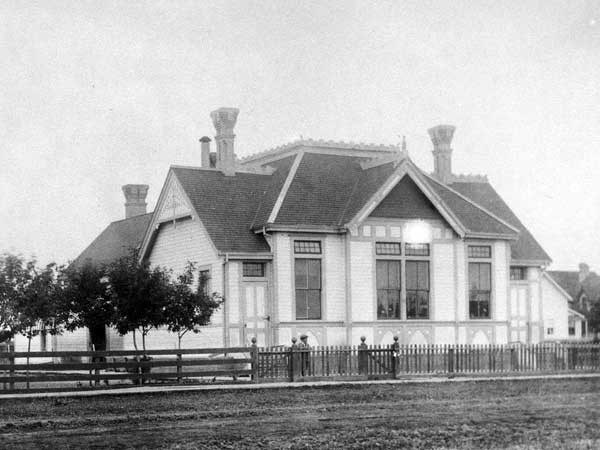 By 1886, accommodation was no longer adequate and the board purchased two lots on Charles Street, near Mountain Avenue and erected a one-room building at the present site of the school. It was in 1899 that the school really began to grow. The old frame building was sold, and moved to James Avenue where it was converted into three dwellings. In its stead a 10-room brick building with an auditorium was built. The cornerstone was laid on August 14, 1899 and the building was formally opened on October 30, 1900. The actual cost was $38,0000. An addition to the school was made in 1913 when 12 rooms were added at a cost of $118,765.

In 1921, a junior high department was organized, the second in the city; and to accommodate the evergrowing school population, a two-storey structure of red bricks was built in the northwest corner of the playground. This building, containing 12 rooms, was known as Machray No. 2 and housed the kindergarten and primary grades. 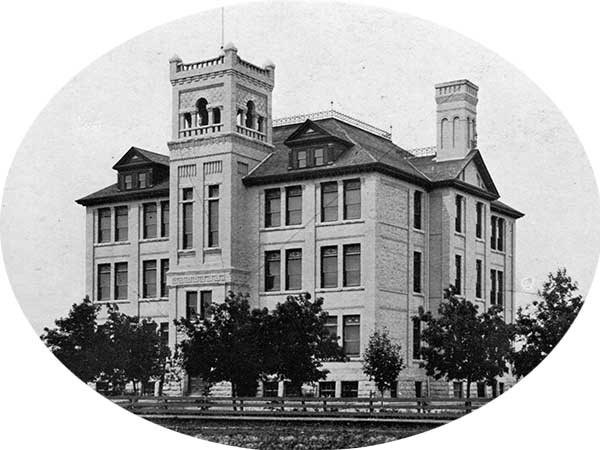 In 1960 the original brick building of 1899 was demolished and a large all-purpose room was added to the remaining structure. The junior high department was transferred to St. John’s School and Machray became once more an elementary school. Due to an enormous influx of immigrants into Winnipeg, enrolment at Machray reached an attendance peak of 1,610 during the 1920s. However by June 1974, enrolment had decreased to 395.

However, by the early 1970s, it became apparent that the building was no longer sufficient to accommodate the students and to meet the demands of its students and teachers. On November 5, 1974 the cornerstone of a new Machray School was laid and the school was officially opened on June 17, 1975. Some of the contents of the cornerstone include: Coins of the Realm - 1974; daily newspapers; silver pin to commemorate the 100th anniversary of the Winnipeg School Division No. 1 -1 871 - 1971; copy of “Our Schools” for September, 1974; a pictorial history of the school; class picture of each child in Machray School; and a scroll bearing each child’s signature. In 1984, students, teachers and alumni of Machray celebrated the 100th anniversary of the school. 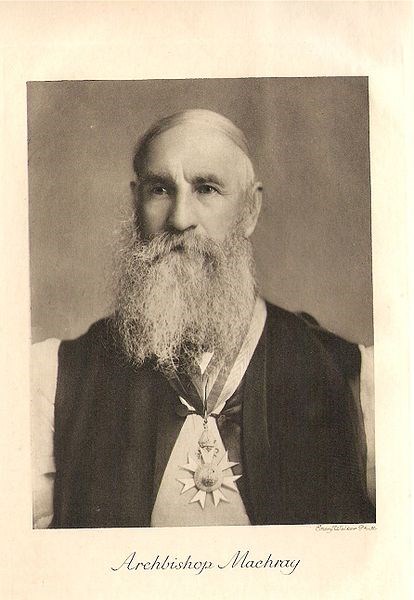 The Most Reverend Robert Machray was born in Aberdeen, Scotland on 17 May, 1831 and educated at King's College, Aberdeen, and Sidney Sussex College, Cambridge.  He entered the ministry of the Anglican Church and was ordained Deacon on 11 November, 1855 and Priest on 9 November, 1856.  In 1865 he accepted the Bishopric of Rupert's Land and was consecrated Bishop on 24 June, 1865 in the Chapel of Lambeth Palace, London.  During his time as Bishop of Rupert's Land he supervised the expansion of the Anglican Church throughout the Prairie Provinces and the formation of six new Dioceses.  He became Archbishop of Rupert's Land and Primate of Canada in 1893 with the formation of the General Synod.  He was active in education, serving as schoolmaster of St. John's College School, Warden of St. John's College and Chancellor of the University of Manitoba (1877-1904).

By 1885 the Canadian Pacific Railway stretched east and west of Winnipeg, and a great change took place in the settlement. Settlers in thousands invaded the prairies; and towns and villages came into existence. The greater part of Archbishop Machray’s episcopate was in this period of transition. He foresaw the change, and when it came, he strove to give it a high and noble character. During the Red River Rebellion, 1869-1870, Machray rendered great political service, preserving the colony from civil war or annexation by the United States. 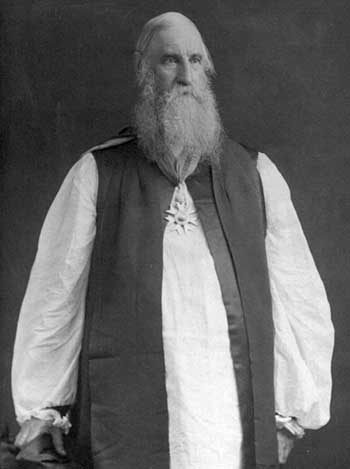 When the Archbishop arrived in the Red River settlement in 1865, he found little or no education; there were no public schools and only one private school. One of his first tasks was to revive St. John’s College, which had been closed for some years; and then to establish professorships, to secure endowments, and erected new buildings. When the province of Manitoba was created in 1870, the Government took over the schools, placing them under the Board of Education, of which the Archbishop became Chairman. In 1877, when Manitoba University was founded, the Government appointed Machray Chancellor of the University, which he held until his death in 1904. In 1893, Machray was named Primate of the Anglican Church for All Canada.

To learn more about Archbishop Robert Machray, visit these links: