Ten WSD students past and present were honoured at the annual Manitoba Indigenous Youth Achievement Awards.

The awards ceremony, which was held Nov. 23 at the Victoria Inn and Conference Centre, saw students receiving their medals and Star Blankets in front of their proud families. Teachers and administrators from their high schools were also on hand to see their students recognized.

MIYAA annually recognizes the outstanding achievements of Manitoba’s Indigenous youth. Recipients are chosen by committees made up of Indigenous youth from the community. The committees look for youth who exhibit high standards of excellence, dedication, leadership and accomplishments in the areas of Academics, Athletics, Art, Culture, Community/Volunteer, Business/Entrepreneurial, Health, Personal Achievement and Employment in a Traditional Field. 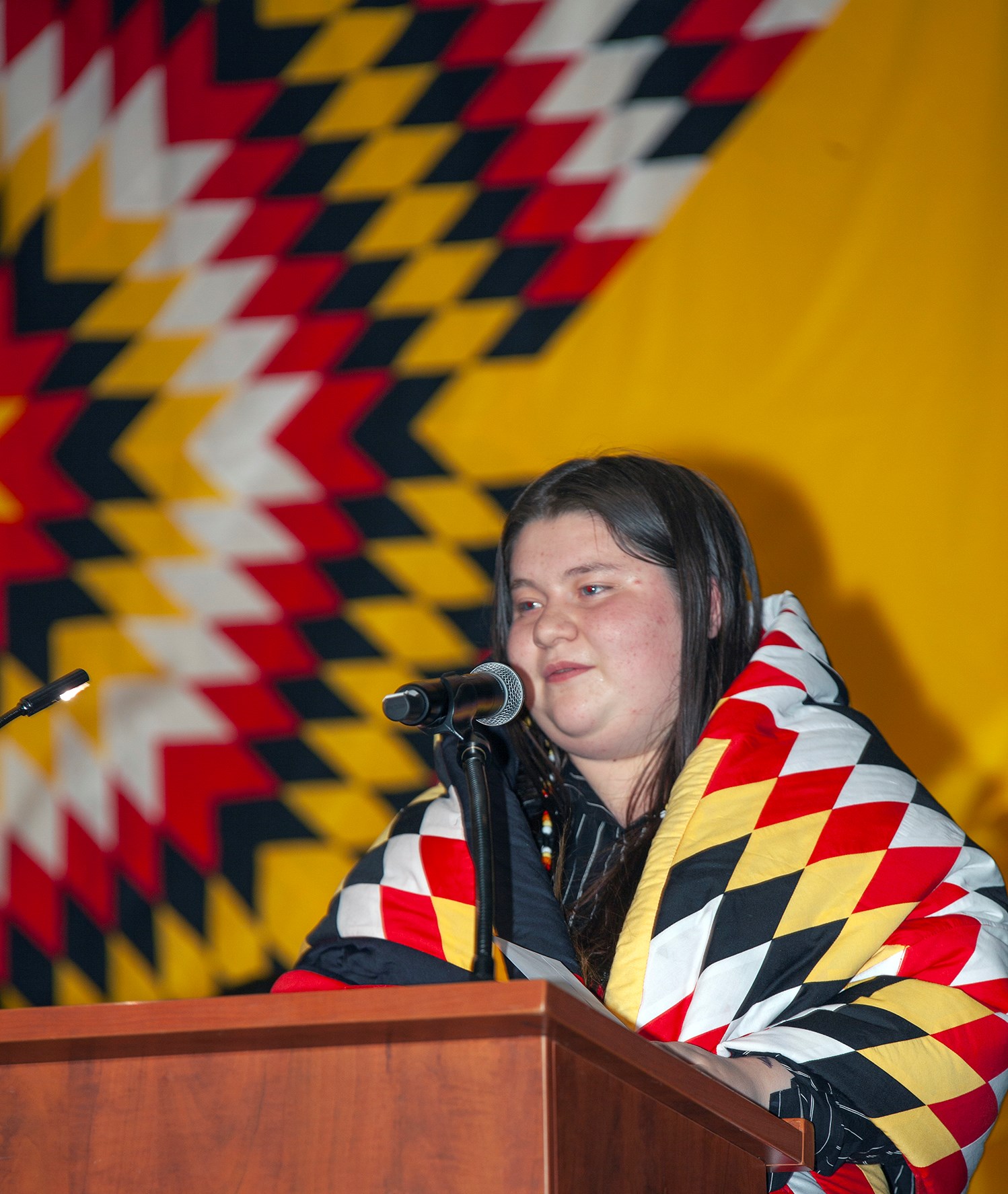 The James Golick Grant for Women in Computology

Jordyn is currently in the post-high Graphic Design program at Tec Voc. She likes designing and the hands-on aspects of graphic design. Her future goal is to attend Red River Polytechnic College to take graphic design or business.

Among Jordyn’s strengths is her creativity—for example, putting cartoon characters into real life scenes. Jordyn has a drive to better herself which shows in her attention to classwork and her personal life. Jordyn is a big help at home to her mom and younger siblings. In the future, Jordyn would like to own a graphic design business and incorporate her Indigenous background into her designs. 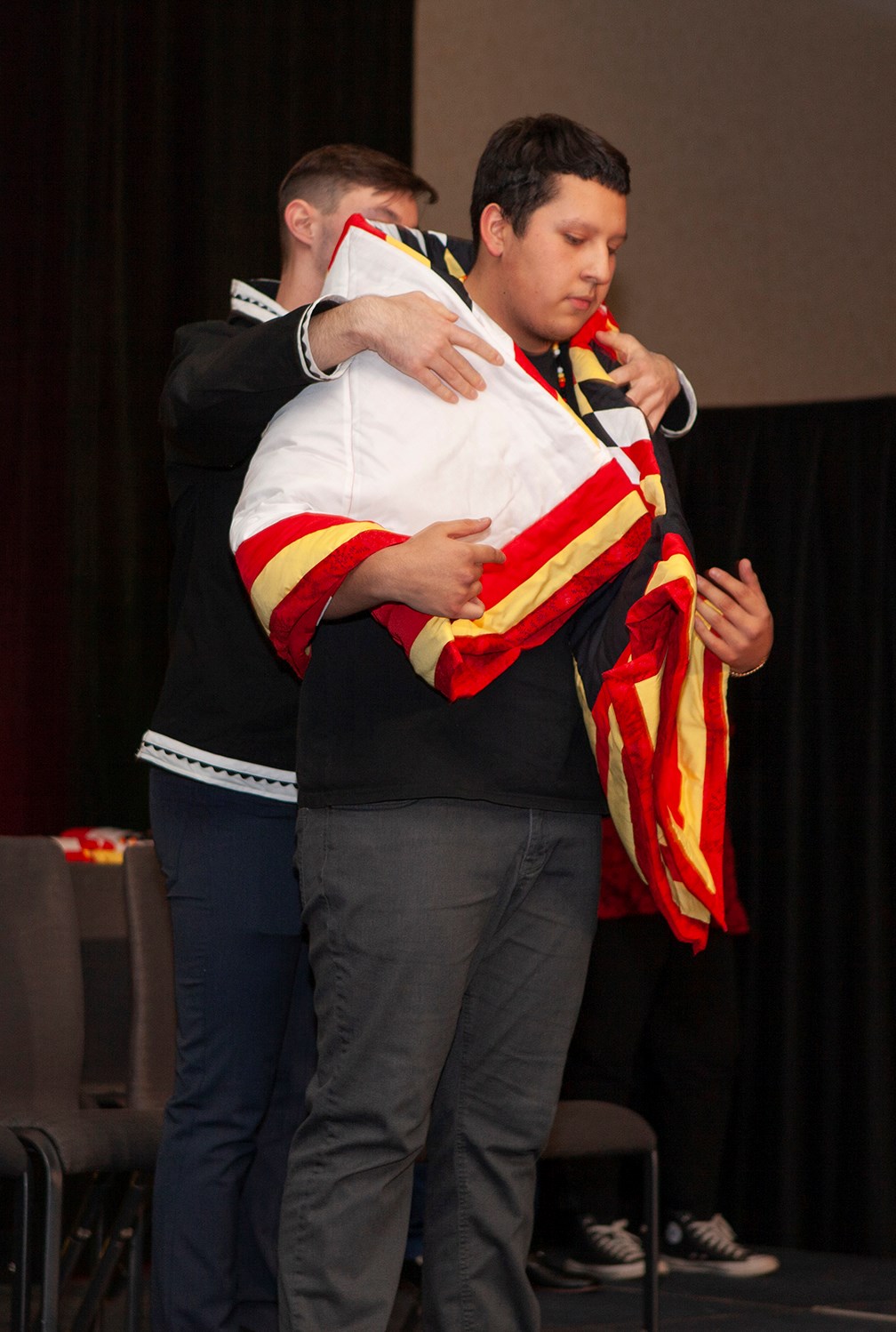 Darryl is an exceptional young athlete who has excelled in the Hockey Academy and the Varsity Basketball Team. He always looks forward to participating and competing in a wide variety of sports, including but not limited to cross-country running, basketball and hockey. Darryl has a positive attitude and always has a smile on his face.

Darryl is also an integral part of Tec Voc’s culinary arts team and will graduate with a dual diploma. He is a participant in the City Youth Alive program and just recently received the Youth Leadership Award. 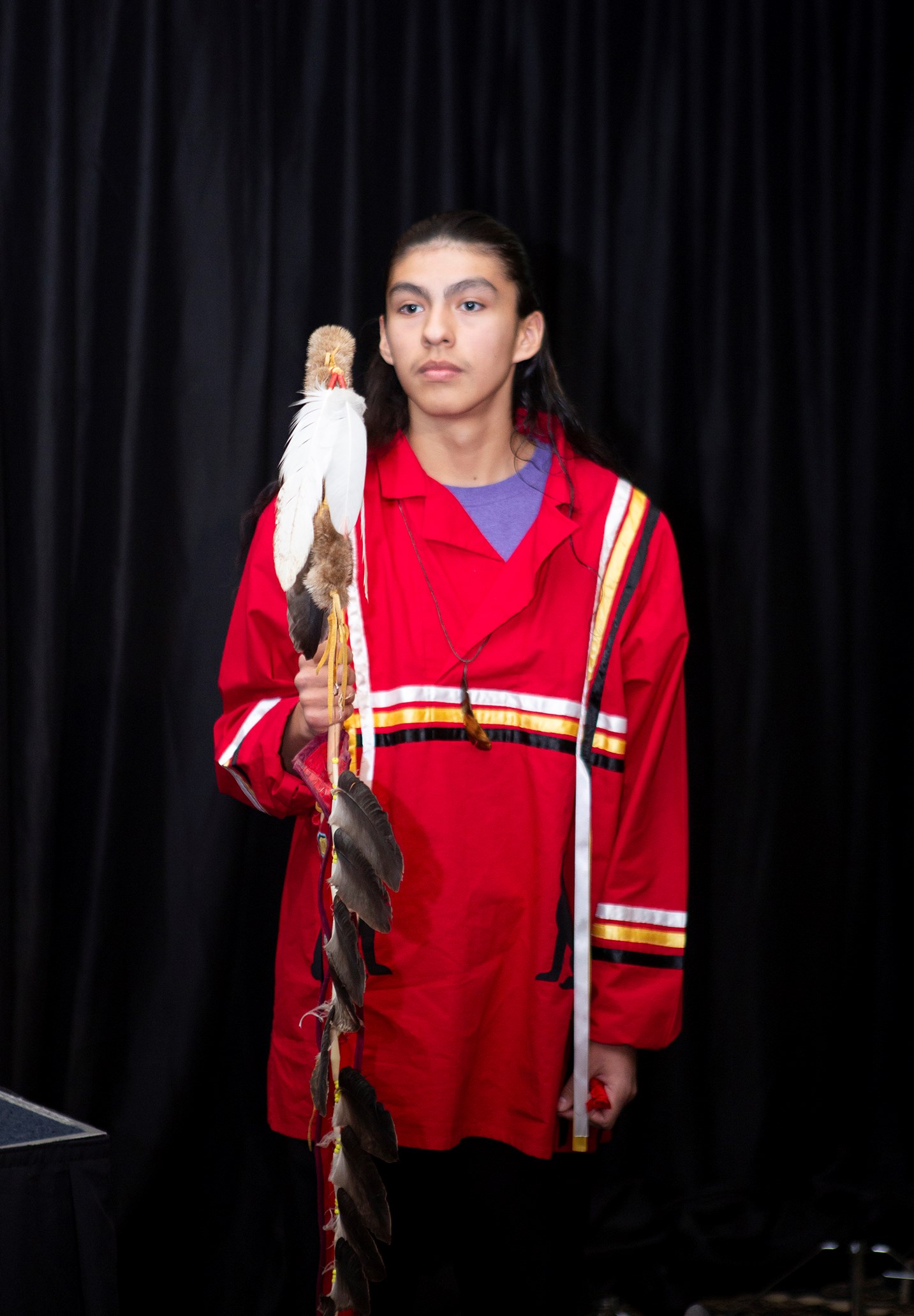 At Tec Voc and beyond, Jean-Paul is a helper, fire keeper and cultural learner; he has attended four sun dances, has been a fire keeper during ceremonies and has helped in the kitchen. Jean-Paul has been medicine picking, picked prayer sticks and helped put up tipis.

This past summer, Jean-Paul was head shkaabe at Lional Houston’s Eagle Wolf Sundance and he organized the shifts for the sacred fire. During the sweat, he aided the head chief by opening the flap of the lodge, tending to the fire and passing the grandfathers. Jean-Paul also went to Eagle Sundance hosted by Red Sky, where he was a general helper, built a makeshift kitchen and was very honoured to make the eagle nest and arbour.

Jean-Paul takes on challenges and grows and learns with each experience. He is a very motivated young man who is resourceful and responsible beyond his years.

Jean-Paul enjoys cooking and is majoring in Culinary Arts at Tec Voc. He plans to pursue a career to become a red seal chef. Jean-Paul firmly believes that cooking for others helps build community. 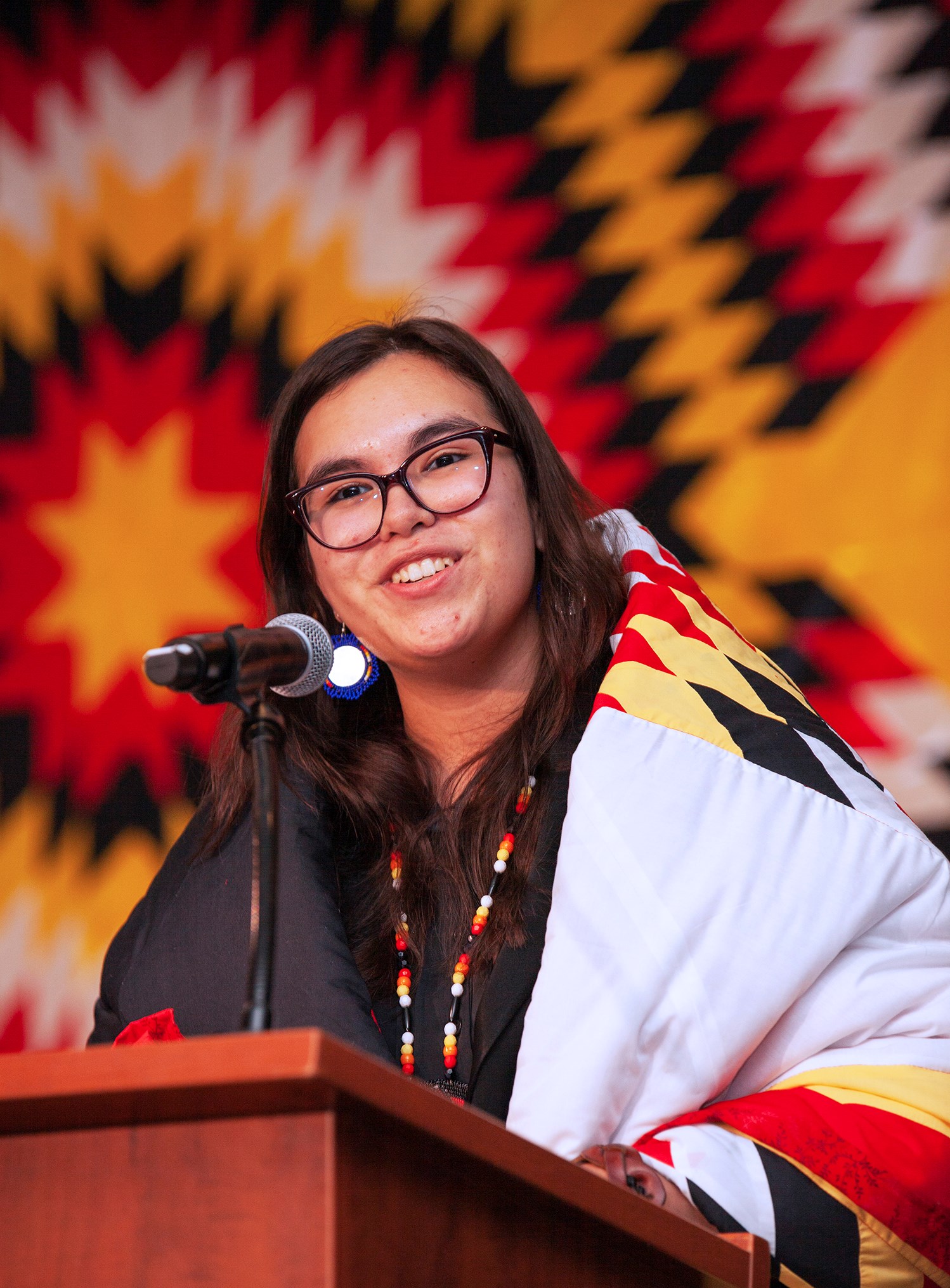 Sarah is a Grade 11 student who carries her names gifted by her family and community close to her heart. Named after her nookum Sarah, Sarah shows her nookum that her identity before residential schools is still here. As Niimiizhiinibekwe, light that dances on the water woman, she walks with her desire to advocate for the earth and water, and to be their voice.

Sarah is involved in the Ethics Bowl, the Environmental Action Crew, student council, and the Indigenous Student Leadership group at Kelvin High School. This year, Sarah co-wrote her school’s land acknowledgement. Sarah plays a lead role in the school’s Truth and Reconciliation Week, and has publicly spoken about the impact of residential schools. Sarah also organizes events through Manitoba Youth for Climate Action leading marches, organizing petitions, and speaking publicly to raise awareness about the dire need to combat climate change. Sarah plans to continue her environmental activism with interest in peacemaking work as a diplomat or as a human rights lawyer. 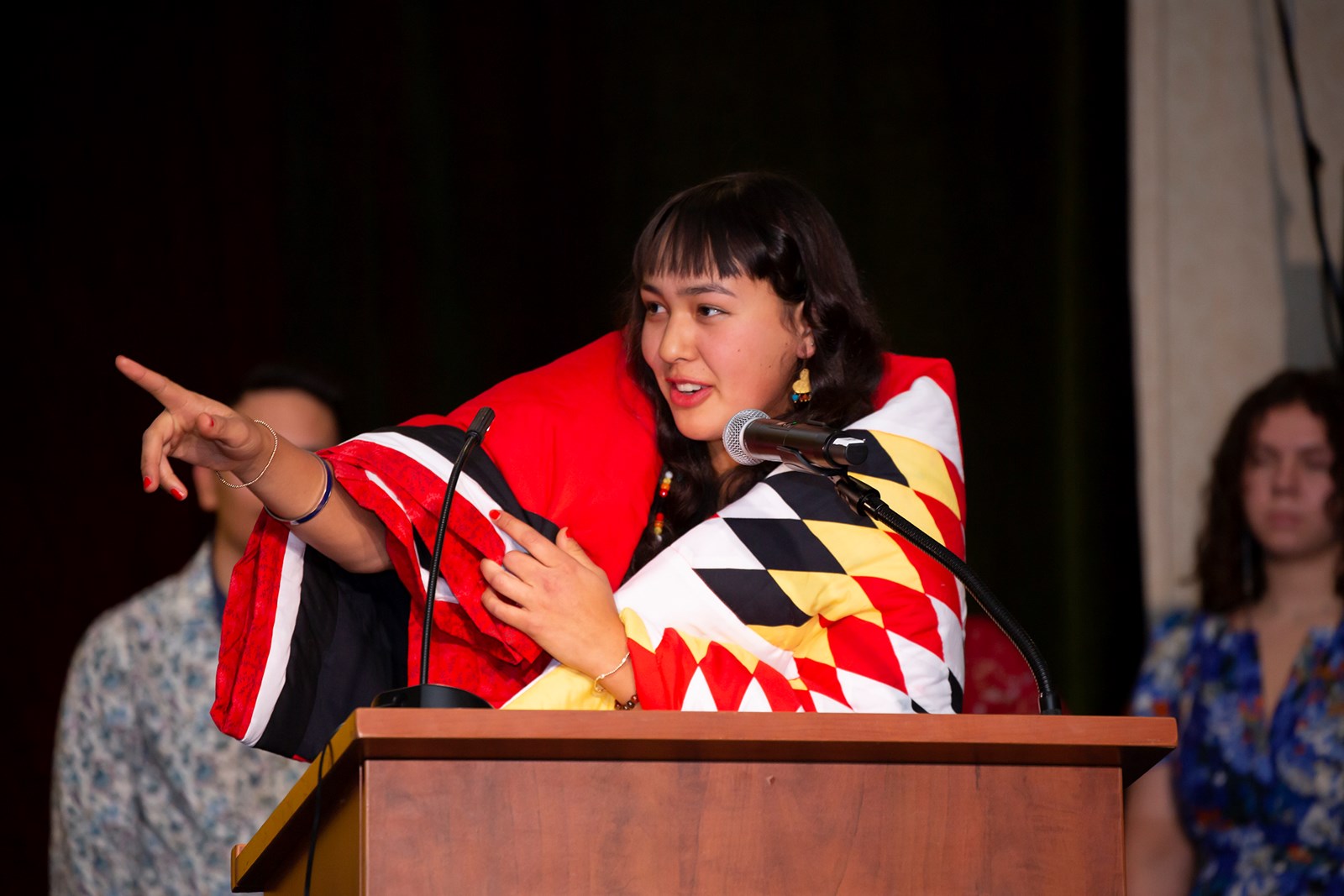 Sparked by Greta Thunberg, Miyawata organized her first student-led climate strike in Winnipeg at 12 years old; 21 students joined her. Within months of the first strike, Miyawata led a crowd of 15,000 through the streets of Winnipeg calling for systemic change.

Miyawata has a fearless drive, professionalism, compassion, and commitment to issues she holds dear. She has a gift of communicating and motivating others to take action that is absolutely inspiring. She is seen as a force and a leader.

Miyawata has been invited as a speaker at conferences such as the International Meeting for Indigenous Child Health on the climate change youth panel and has been filming a forthcoming documentary on her work as part of the My Lifeseries. 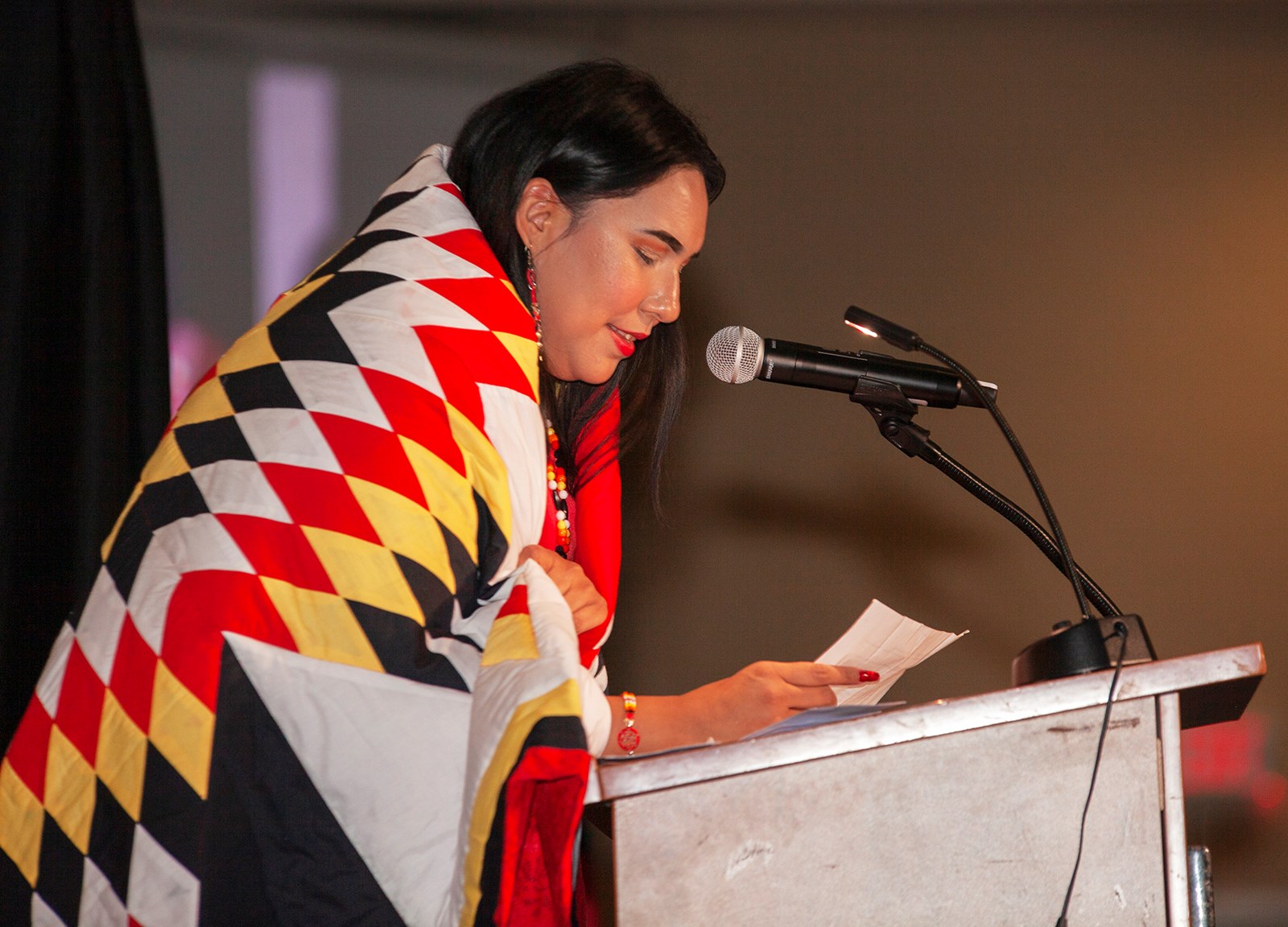 Santi is a proud singer, a fancy shawl dancer, and a drummer. A role model to others, Santi became a mentor at Restoring the Sacred at Ka Ni Kanichihk in 2017. In this role, she supports Indigenous youth from northern and rural communities who are new to Winnipeg with finding resources, tutoring with school work, navigating and learning about Winnipeg, and assisting in teaching basic life skills.

Santi is a currently a student at Red River College in the Pathways to Health Program where she will continue on to receive her nursing degree. Once Santi has her degree, she plans to move back to her home community of Island Lake, Wasagamack as a nurse.

Santi is a respectful, humble young woman who works hard and is a mother of two beautiful children. Her strong character and her determination to overcome personal barriers and challenges empowers Santi to live a positive healthy lifestyle for her children, her family and her community.

Breanna is a graduate of Children of the Earth High School, where she was part of the Medical Careers Exploration Program. Breanna is proud to say that her highest grades were in chemistry, a difficult subject she worked very hard to learn.

Breanna attended school regularly during some tumultuous personal times. Her former teachers at Children of the Earth remark on her determination and commitment to education. They describe her as a conscientious student with a strong work ethic and dedication to her family.

Breanna is currently a student at the University of Manitoba pursing a Bachelor of Science Degree. Her dream is to obtain her Master’s degree and her PhD. Her main goal is to work at the National Microbiology Lab in Winnipeg as a scientist or microbiologist. 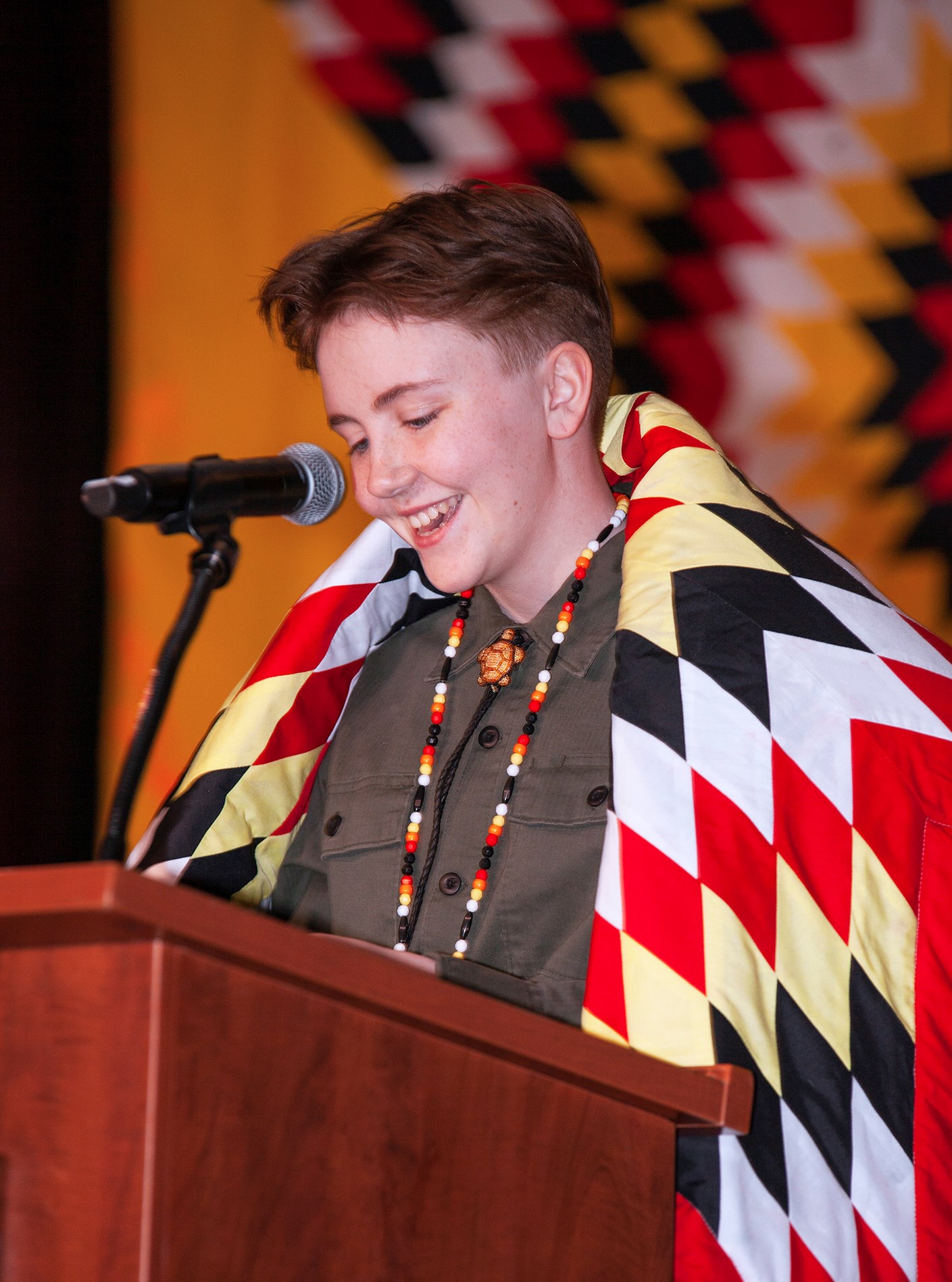 Cooper is proud of his Métis heritage and often brings his perspective and the experiences of his family into class discussions and ideas for artwork. Cooper is a student leader, is on the Orange Shirt Day committee and is an advocate for the experience of Métis students and families in the school.

Cooper is a youth advocate who is on Grant Park’s student council, plays a big role in acting in Grant Park’s drama program and is a public speaker for Métis history and contemporary issues to both his peers and teachers.

In the After-School Leaders program through Manitoba Theatre for Young People, Cooper has acted, written, directed and operated cameras and sound equipment. Cooper tackles every job with commitment and dedication. Cooper is known to be original, thoughtful, imaginative, ambitious and funny. 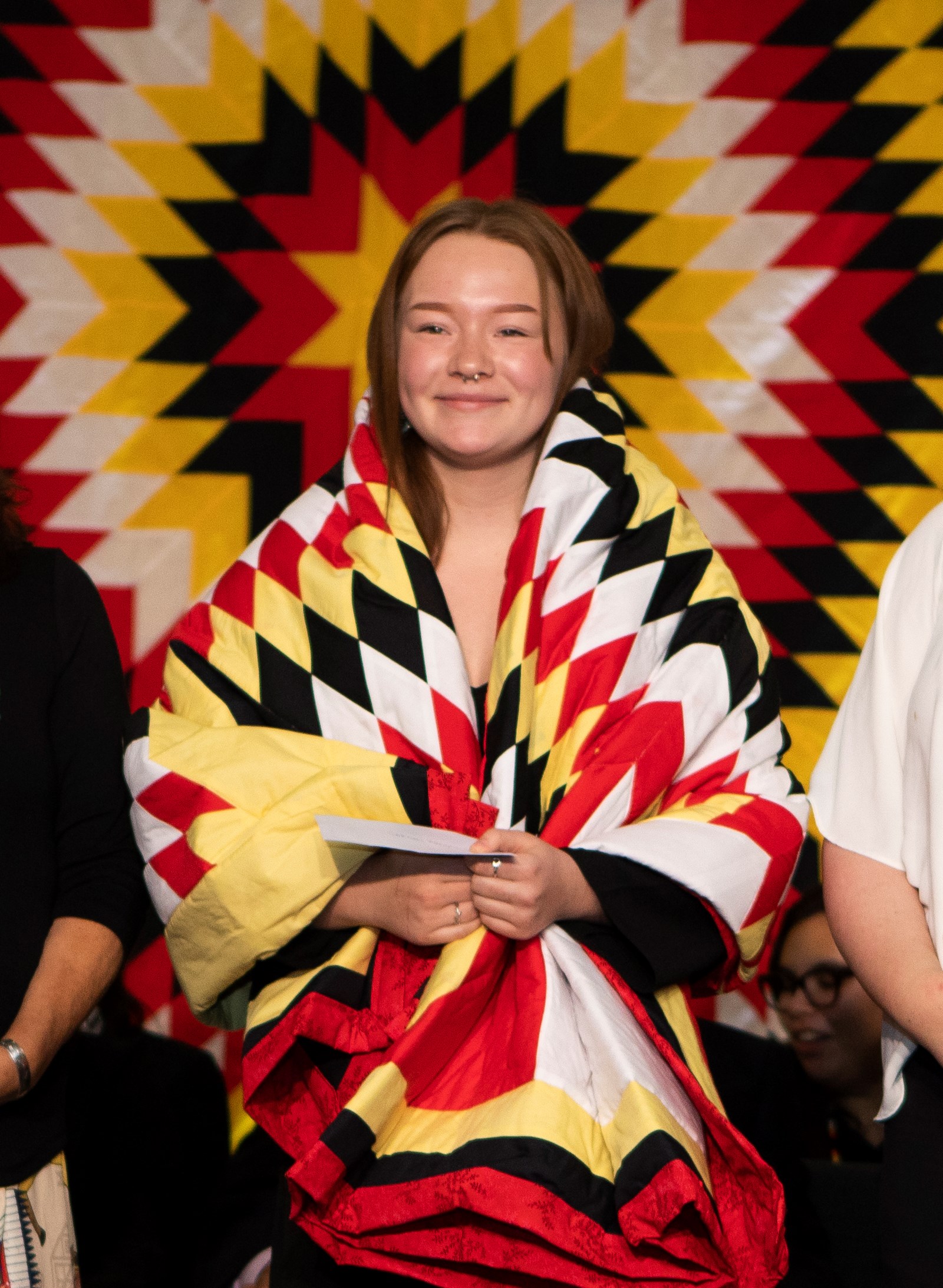 The James Golick Grant for Women in Computology

Sohara has volunteered her time on the St. John’s student council and with sports teams. During her service with student council, Sohara took high quality photographs of school events such as Winter Spirit Week and organized the photography sessions for the Junior Varsity and Varsity athletes for the 2021-2022 yearbook. Sohara took the time to edit and integrate them beautifully and creatively into the yearbook.

Sohara has two role models who have supported her in her learning journey: her mom, who has always listened and guided her, and her teacher Mrs. Paradis—who always told her that she could accomplish anything if you set your mind to it. 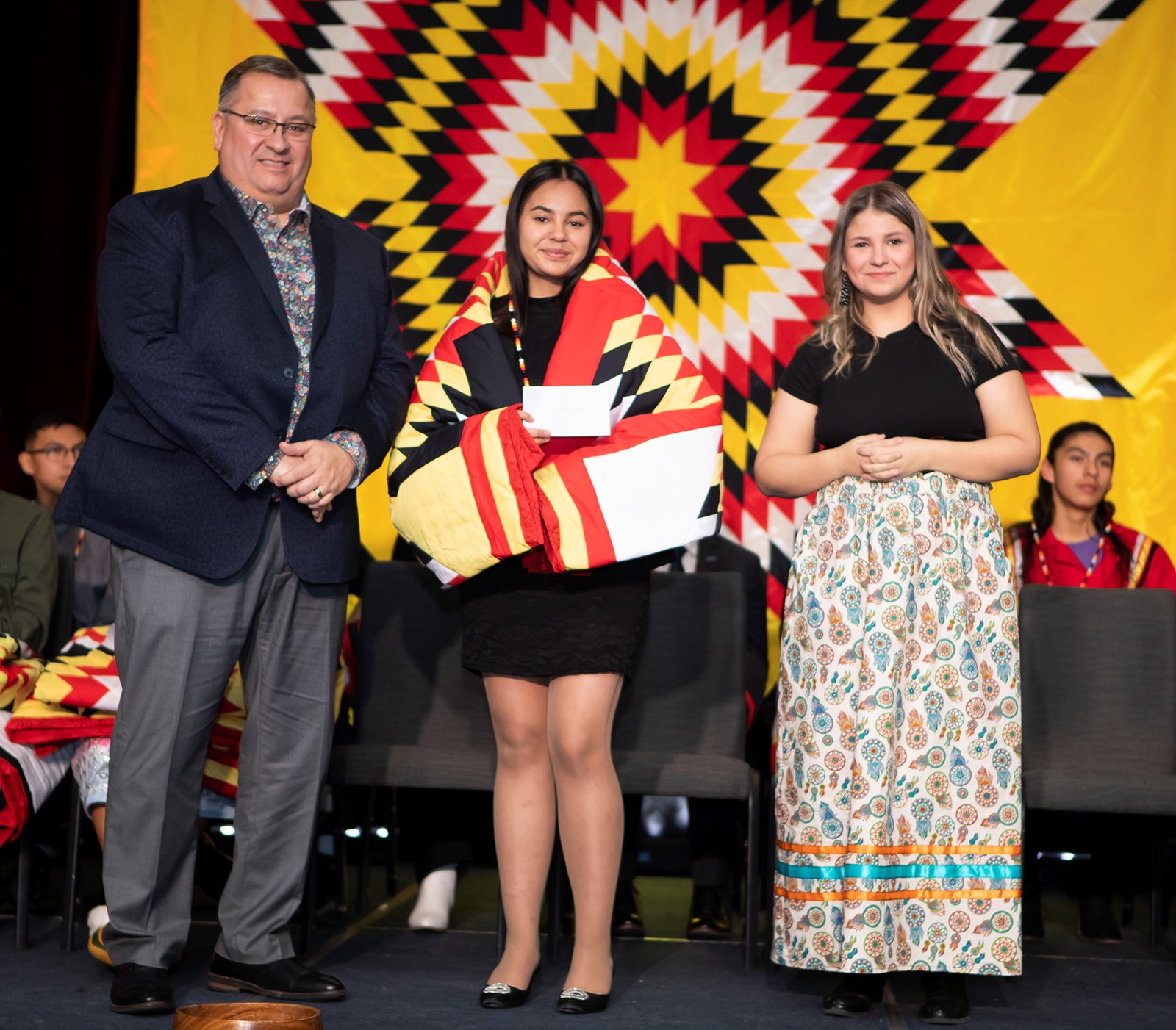 Rihanna and a team of students took on the challenge of turning the school Café into a student run business. Rihanna and her team generated a business plan, created a menu and are working on creating a new look and feel for the female Indigenous run business. Rihanna’s team plans to start to train and mentor some of the younger students in the school. She believes that this will help the youth at her school see themselves as part of the school community.

Rihanna has a positive attitude and she leads by example. She always exhibits positive energy within the building, connects with the staff, peers her own age and also goes out of her way to support younger students within the school. Rihanna joined the student council this year; this gave her more of a voice as well as the opportunity to make the school a better and enjoyable place for all.